Before continuing, I would like to thank Marco Romanelli for the invitation to participate as a speaker in the only session about wound healing at the congress. It was a real honour to meet great experts whom I admire. I learned from their presentations and enjoyed a lot talking about the treatment Pearl in our clinic,punch grafting. As Patricia Senet and José Contreras highlighted, the figure of the dermatologist is very important in wound management, especially in wounds secondary to less frequent aetiologies (tumours, inflammation, arteriolopathy). In addition, as Patricia Senet pointed out, when faced with an ulcer that does not close, we must always ask ourselves three questions:

The dermatologist is key in this differential diagnosis 🙂

Coming back to the topic of post, let’s understand why there is growing interest in the use of topical timolol in wounds, especially among dermatologists.

Timolol maleate is a non-selective beta-blocker used for the treatment of glaucoma in ophthalmology at a concentration of 0.25 or 0.5%, in solution or gel. In dermatology, it is increasingly used in the treatment of certain infantile hemangiomas, with an excellent efficacy and safety profile. Like the rest of the drugs in the beta-blocker family, it prevents the binding of catecholamines (adrenaline and noradrenaline) to the β-adrenergic receptors on the cell surface, thus inhibiting their action.

Multiple cells in the body have this type of receptors. In fact, since the stimulation of the β-adrenergic receptors of cardiac cells increases heart rate and contractility, as well as blood pressure, the use of systemic beta-blocker drugs is widespread in cardiology.

Timolol is called “non-selective” because, unlike selective beta-blockers (also called cardioselectives), it does not have a preference for a particular type of receptor.

Why does it have a potential interest in wound healing?

First of all, I have to say that I had the following mental association: non-selective beta-blockers decrease peripheral tissue perfusiónè avoid in patients with arteriosclerosis ulcers and arteriolosclerosis (like Martorell ulcer)! And in fact, this recommendation is published and there is consensus among experts.

Therefore, the first time I saw a publication about thymolol in wounds, it caught my attention. Then, by digging deeper into the real impact of beta-blockers on peripheral skin microcirculation, there seems to be controversy.1

But well, analyzing in more detail the relationship of systemic beta-blockers with wound healing, in burns it has been found benefit of propanolol to decrease the damage caused by the typical hypermetabolic response in these patients, shortening and improving the healing process.2

What actions are associated with timolol in order to understand its potential beneficial effect on healing?

The different cells involved in healing have beta-adrenergic receptors. 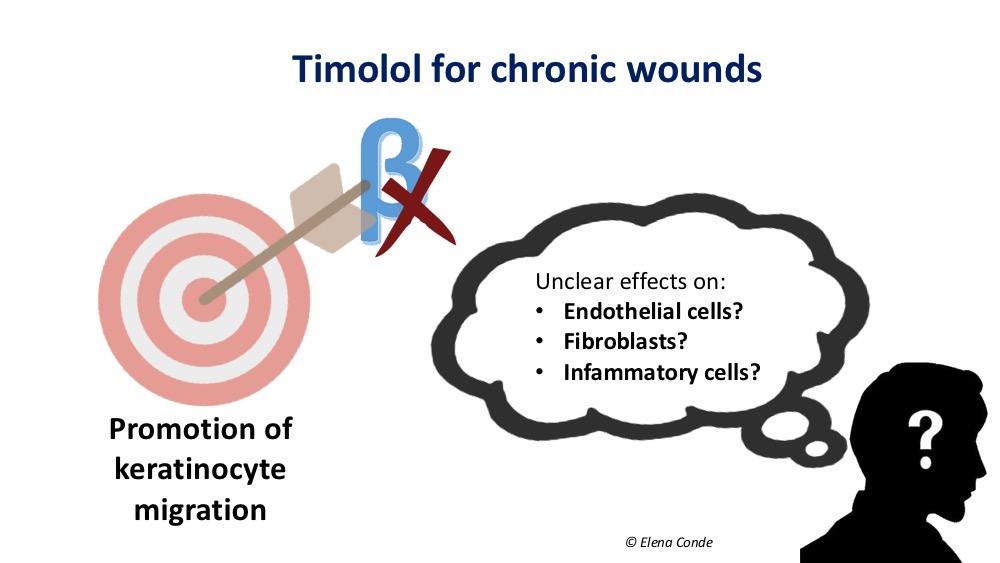 On the other hand, if we analyse the studies on their effects on other cell types, the beneficial effect of timolol would not be so clear.

Regarding fibroblasts, on whose surface these receptors are also present, the results are contradictory both in vitro and in studies in rats, even associated with delayed wound contraction and decreased collagen density.5

The effects of timolol on cells involved in chronic inflammation of non-healing wounds, neutrophils and macrophages are also unclear. Both agonists and receptor blockers β-adrenergic of the surface of these cells have been associated with decreased recruitment and migration.6

Which human studies have been published on timolol in wounds?

There are very few publications, so there is no standard of frequency of application or amount needed per wound area. The most frequent is daily application and 1 drop for every 2 cm from the wound edge. The absence of registered side effects described stands out.

I have found 4 isolated cases and two small published series. The cases are long-standing ulcers not responding to an adequate conventional treatment. These wounds  are two post-surgical wounds (one on the trunk7 and another on the scalp8), a venous leg ulcer9 and a leg wound in the context of peripheral artery disease10, with good response with daily application of timolol.

A series of 5 patients,11 including recalcitrant wounds of different aetiologies in the lower limbs, achieve an area reduction of all lesions in less than 8 weeks, with complete epithelialization of 3 lesions. The frequency of application in this series varies from daily to weekly.

The other published series is a non-randomized controlled prospective study that includes 60 patients with leg ulcers of different aetiologies of more than 6 weeks evolution.12 30 patients are treated with a 0.5% timolol solution, in addition to the treatment performed in the control group, which also includes 30 patients. They found statistically significant differences in wound area at 4, 8 and 12 weeks (61.79% vs 29.62% in the final measurement), in favour of the treatment group, regardless of the cause of the wound.

There are no studies on systemic absorption of timolol when applied to chronic wounds, but no side effects have been found in the published series on ulcerated infantile hemangiomas.

I imagine that after reading all of this you will have many questions in mind and. These are the main ones that have arisen in me:

It is compulsory to end this post with the words “more studies are needed”. It is very hopeful that a search on clinicaltrials.gov (page where clinical trials are registered before they are performed), with “wounds” and “timolol“ as keywords, will show 5 clinical trials. However, one of them has been closed for not getting funding for its performance and another is listed as completed but without results publication (42 patients, benefit of timolol in venous ulcers, 12 weeks). But well, there are 3 active studies, one in diabetic foot and two in post-surgical wounds. Let’s see if our doubts are resolved with future studies! 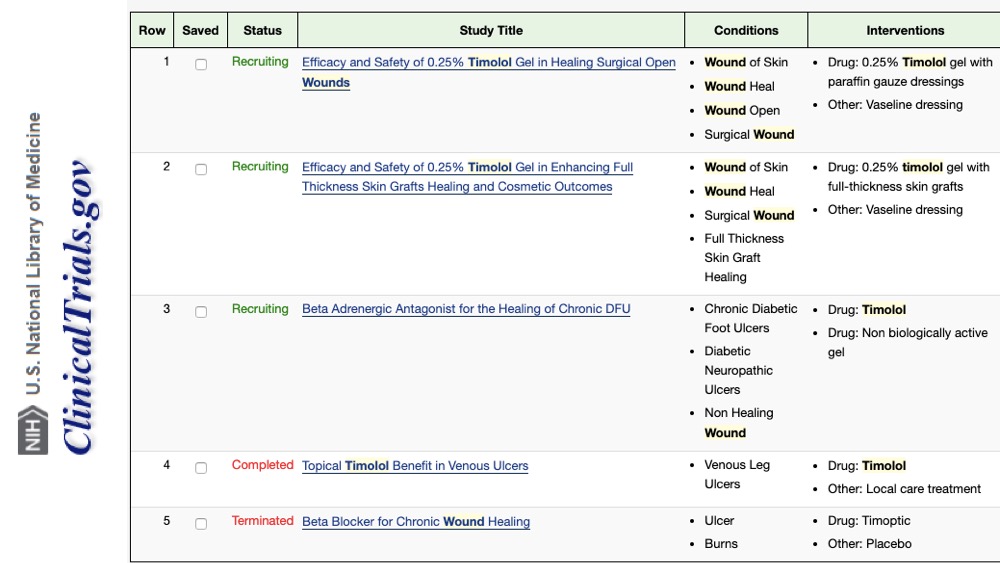