Povidone-iodine is a product that is used by many professionals who treat wounds, but it also has many detractors… Despite not being new and having an enormously extended use, there is much ignorance and debate about this antiseptic. Surely you have asked yourself some of these questions about povidone-iodine: Why is it so widely used in clinical practice? What type of wound and person is it for? What differences are there between its different presentations? Is it really as cytotoxic as people think?

In this post we will review and analyse the available evidence on the usefulness and safety of using povidone-iodine in chronic wounds. A group of Asian experts with extensive experience in wound healing met in 2016 to evaluate the available published evidence on povidone-iodine and to share their experience with this cheap and widely used product in order to reach a consensus of recommendations in Asia.1 Therefore, much of the information in this entry is taken from that interesting document.

Povidone-iodine is a chemical complex composed of povidone (water-soluble polymer), hydrogen iodide and elemental iodine. It is therefore an iodophor, i.e. an iodine carrier.

Despite the fact that the history of povidone-iodine is little more than 60 years old, since the beginning of the 19th century the use of iodine was quite widespread in the prevention and treatment of skin infections and wounds, due to its recognized broad-spectrum microbicidal action. However, iodine compounds existing until then, such as tincture of iodine, produced irritation, cellular toxicity and high skin pigmentation. With povidone-iodine these adverse events largely disappear, as this complex provides a reservoir for the continuous release of small amounts of free iodine. This free iodine, slowly released from the povidone-iodine complex, kills eukaryotic or prokaryotic cells by altering the cell membrane and penetrating the cytoplasm by denaturing proteins, fatty acids and nucleotides. As it is a slow release, the concentration of free iodine is low, so its toxicity to human cells would be minimized.1,2 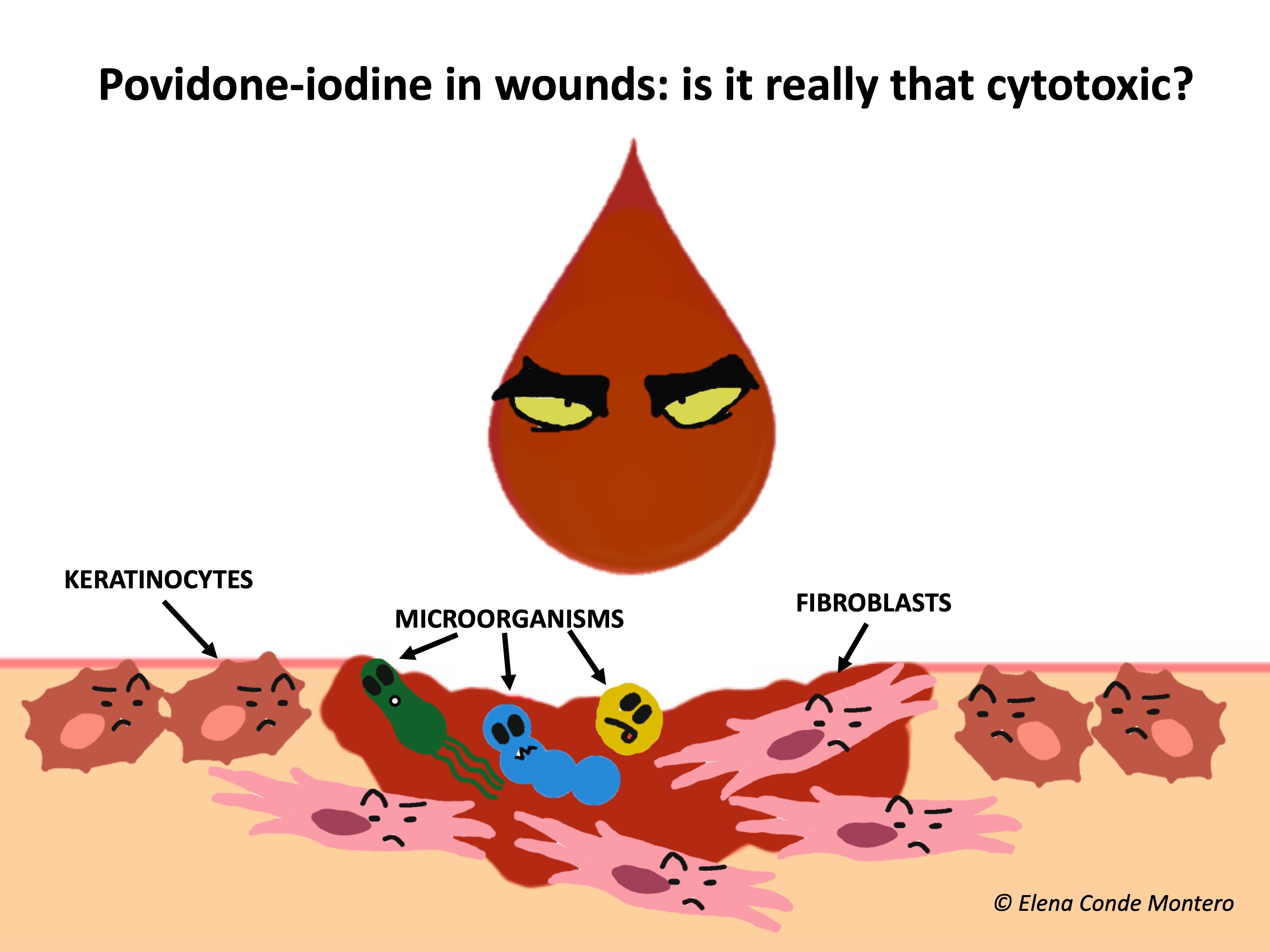 What has been studied about its microbicidal activity, its penetration into biofilms and its generation of resistance?

Its microbicidal efficacy has been studied in vitro. It has demonstrated a wide spectrum of activity against Gram+ (including MRSA), Gram-, fungi, viruses and protozoa.1

Regarding its action on biofilms, a recent in vitro study has shown its efficacy, superior to other antimicrobials, in eradicating biofilms of Pseudomonas aeruginosa, MRSA and Candida albicans.3 But I repeat that these studies have been conducted in vitro, so they may not be reproducible in vivo. In fact, certain proteins present in wound exudate may inactivate iodine and thus limit its microbicidal effect, something that requires further evaluation in new in vivo studies.

On the other hand, discussing the bacterial resistance that povidone-iodine might generate is essential, as the large increase in resistance to antibiotics (and different antiseptics) is one of the major clinical and public health problems worldwide. However, despite its widespread use, the development of povidone-iodine resistance has not been described.1

How does the presentation of povidone-iodine influence its action?

Are allergies to povidone-iodine common?

There is much debate among dermatologists about the allergenic and irritant potential of povidone-iodine. Actually all antiseptics can irritate the skin if used improperly, particularly on skin with eczema, in occlusion and at high concentrations. Povidone-iodine contact dermatitis has never been considered a frequent adverse event, especially in view of its widespread use. Isolated descriptions of contact skin reactions, both irritative and allergic, have been published. However, as there is a lack of consensus on the concentration and vehicle of iodine compounds to be used for diagnostic epicutaneous testing, it may be difficult to discriminate between the two types of contact dermatitis (allergic-irritative).4

What do the studies say about its influence on healing, and is it really as cytotoxic as thought?

The effect of povidone-iodine on healing has been widely discussed. Studies with povidone-iodine in vitro and in animals (mainly rats) have shown variable, some conflicting results, and most have been conducted for more than 20 years.1 In vitro studies demonstrate dose-dependent cytotoxicity of povidone-iodine in cell cultures, including keratinocytes and fibroblasts.5,6 However, in mice it has been found that its use produced a faster and more complete neovascularization than other antiseptics, with a positive effect on healing.7 In fact, it has been found that concentrations equal to or less than 10% (the most commercialized in our environment), do not inhibit the processes of granulation and epithelization.1

It should be noted that experimental conditions also have a clear impact on the results. For example, the additives added to the medium may themselves promote toxicity. In fact, the pronounced cytotoxicity demonstrated in certain in vitro studies has not been confirmed in human studies, where it has been found to be safe at adequate concentrations. Human studies are scarce, with few patients included and many limitations. The different published studies include burns, pressure ulcers, venous ulcers, trauma, lacerations, skin grafts. Those studies comparing povidone-iodine with other dressings showed no inferiority in healing rates and some even found superiority. Single studies that have studied its antimicrobial activity in chronic ulcers have found decreased bacterial growth.1,8

Conclusion: We need more well-designed human experimental studies to better understand the disparities between in vitro and animal studies.

And the toxicity from its systemic absorption?

It is not clear how much povidone-iodine and how often it is applied that can develop systemic toxicity. Caution is essential in patients with thyroid disease, pregnant women and children.1,2

In what situations do I use povidone-iodine in chronic wounds?

In those situations where the highest priority is to avoid bacterial growth and therefore also to promote an astringent environment (the excipient povidone-iodine solution has a drying action). The most frequent situation would be arterial trophic lesions pending revascularization or amputation, or those who have no option of any of these surgical alternatives due to the poor general condition or complex situation of the patient.

Another interesting use of povidone-iodine solution is its application in heel pressure ulcers with the presence of dry necrotic scab, adhered to the wound bed, without fluctuation. In these cases, if the ulcer is superficial and vascularization is adequate, this scab could promote underlying epithelialization. On the contrary, if the ulcer is deep and extensive, there is associated arteriopathy and/or the patient’s complexity situation does not allow another attitude that favors healing, the objective will be exclusively to maintain the protective scab to avoid superinfection. Moreover, regarding pressure ulcers, povidone-iodine is also of interest to people in a situation of great complexity or end of life, with high risk of infection and need for frequent dressing changes.

Finally, this priority of antiseptic and drying action can also be found in infections of chronic wounds with systemic impact, with drainage of purulent material, where frequent dressing changes with thorough cleansing and application of antiseptic will be excellent adjuvants to the systemic antibiotic to control the infection.

What is your experience with povidone-iodine?