Recently, the 45th National Congress of the Spanish Academy of Dermatology took place in Madrid, where, with Dr. Rita Cabeza, I had the honour and pleasure of chairing a session about clinical cases on wound healing. The discussion that followed each presentation was enormously enriching for all. In this session I personally met Dr. Alejandro Sierra, a specialist in Phlebology at the Clínica Universitaria de Navarra. I would like to reflect in this entry the passion he transmitted to me when he told me about the excellent results that have been obtained for years in his Department with sclerotherapy for venous ulcers. For this, he has prepared a presentation with brushstrokes of his experience, which you will find at the end. I would like to thank him and his team, especially Dr. Eugenia Pillado, for the valuable bibliographic and iconographic contributions to this entry.

To put us in the picture, in 2004 the results of the ESCHAR randomized clinical trial were published,1 in which the benefit of superficial venous system surgery combined with compression was compared with compression therapy alone, in patients with active or recently healed venous ulcers (stages C6 and C5 of the CEAP classification, respectively). Although no difference was found in the healing rate at 6 months (65% in the 2 groups), the lowest recurrence rate at one year observed in this study (28% in the compression therapy alone group vs 12% in the compression and surgery groups, p<0.0001) was again found at 4 years of follow-up (56% vs 31%, respectively, p<0.01).2

We cannot forget the patient profile that usually presents this disease, elderly people with many comorbidities. Therefore, minimally invasive endovenous procedures, mainly sclerotherapy, widely used in the treatment of varicose veins, have positioned themselves in recent years as a very interesting alternative to surgery in the management of venous ulcers, with similar results (even better in some cases) and fewer complications.

There are different techniques and sclerosing substances. Sclerotherapy with microfoam, which is achieved by vehiculating the liquid sclerosant in microbubbles, is more effective, since it achieves greater contact with the endothelium and, therefore, damage at all points inside the vessel, which it fills completely. When the sclerosing substance is injected into the affected vein, the vein closes due to the endothelial damage and the subsequent fibrosis of its walls. Therefore, the reflux in that path is eliminated. The objective of this treatment, as with surgery or other endovenous techniques (radiofrequency, laser ablation), is to eliminate the incompetent veins that are producing the venous hypertension that causes the ulcer. The special benefit of sclerotherapy, compared to the other alternatives, is the possibility of accessing all the affected veins involved in the reflux, including the smaller ones. The ultrasound control allows to verify that all the incompetent vessels of the superficial venous system have been occluded, which go from the origin or origins of the reflux, pass through its transmission route and reach their destination on the surface (including the smallest vessels of the ulcer bed, those of inframalleolar location and in context of great cutaneous deterioration). This is a fast, safe and cost-effective technique. 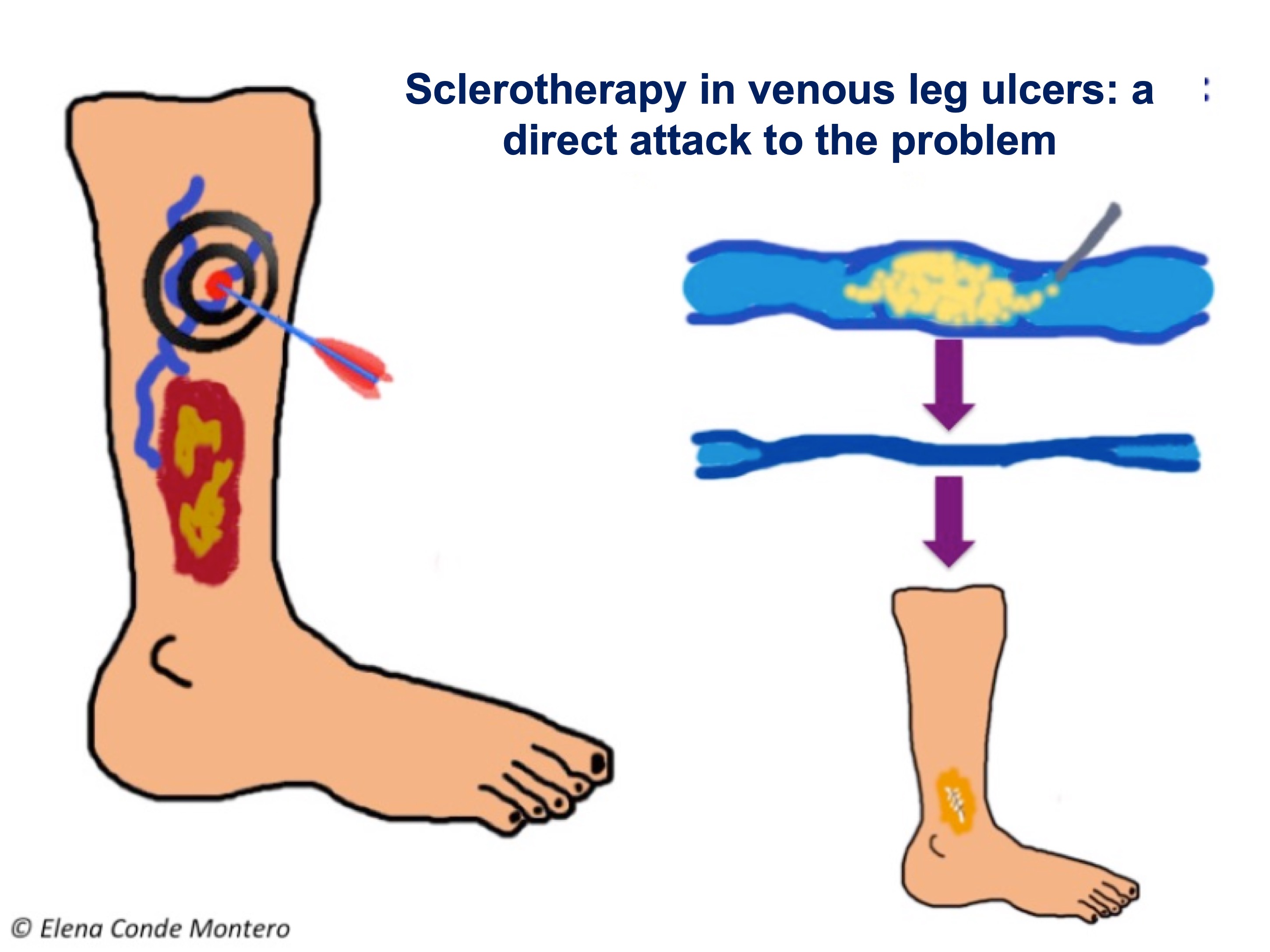 The first series of patients with venous ulcers treated with intravenous injection of ultrasound-guided polidocanol microfoam was published by Dr. Cabrera (inventor of the technique for obtaining this sclerosing foam, patented in 1993), in collaboration with the phlebology team of the Clínica Universitaria de Navarra.3 This retrospective series included 116 patients with venous ulcers, in which a healing rate of 83% and a relapse rate of 6.3% at 6 months were achieved.

They have recently published a new series that reflects the excellent results of their experience4 , which are comparable to those obtained by other authors5,6,7.

In this series of 180 patients published by Dr. Pedro Lloret, a healing rate of 79.4% was obtained at 6 months. In the subgroup analysis, the isolated presence of superficial insufficiency (no deep component or incompetence of the perforators) was associated with higher healing rates (95.1%). The recurrence rate at 1, 2 and 3 years was 8.1%, 14.9%, and 20.8%, respectively, with higher risk in patients with perforator vein incompetence or history of surgery. However, the extensive experience of these authors defends that, with adequate follow-up of patients (and periodic sclerosis of refluxes from the superficial venous system, which appear by recanalization of occluded but non-fibrous venous segments, or are generated by new pathways, often from incompetent perforators), the rate of ulcer recurrence can be maintained at less than 4%.

This work also reflects the positive impact of reduced edema and pain control on patient quality of life.

As the previously cited studies show, the benefit of sclerotherapy is not limited to ulcers with isolated superficial venous insufficiency. Its use in ulcers with an arterial component or with affectation of the associated deep venous system, can help to control venous hypertension, with a decrease in edema and with a direct impact on healing.

On the other hand, treatment with sclerotherapy has special interest in patients without adequate adherence to compressive therapy.

Here I leave you with the presentation that the experts of the Clínica Universitaria de Navarra have kindly prepared for us.