Healing is the natural process to regenerate the tissues that have suffered an injury. In the case of an erosion, which exclusively affects the epidermis, the tissue is restored, achieving a structure similar to the previous one. If, on the other hand, deeper structures are affected, this regeneration does not take place, and a scar occurs.

In acute wounds, there is a different healing mechanism depending on whether the lesions are of partial or total thickness. In partial thickness wounds, the annexes are preserved. These structures serve as a reservoir of epithelial cells and re-epithelialisation occurs from the edges and centre of the lesion. In full thickness wounds, since the annexes are not present, re-epithelialisation is only possible from the edges.

When a wound is produced, a series of complex biochemical phenomena occur in order to repair the damage. These phenomena occur with some temporal overlap but, for better understanding, they are consensually into the following phases: inflammatory, proliferative and remodelling phase.

This first phase consists of a vascular and cellular response. Platelets are the first cells to intervene, with their haemostatic role and their releasing of growth factors that stimulate healing. After an early vasoconstriction to stop bleeding, there is vasodilation, extravasation of fluid into the extracellular space and a blockage of lymphatic drainage, with the consequent appearance of cardinal signs of inflammation (heat, flushing and tumour). This first phase usually lasts 24-48 hours, but in some patients it can last up to 2 weeks. If it lasts longer, it is considered chronic inflammation and hinders healing.

When an injury occurs, the vessels are damaged and collagen is exposed. This collagen and the thrombin generated in the haemostasis process stimulate the platelets, producing their activation, adhesion and aggregation. Platelets release different mediators such as serotonin, thromboxane A2, fibrinogen, fibronectin and thrombospondine, thus keeping the aggregation process active to stop potential bleeding. The platelet-derived fibrinogen is converted to fibrin, which acts as a matrix for monocytes and fibroblasts. The release of prostacyclin by endothelial cells inhibits platelet aggregation, thus limiting the spread of the coagulation process. In this inflammatory phase, the role of growth factors, such as PDGF (platelet-derived growth factor), with chemothactic, angiogenic and mitogenic properties, is essential.

In the early hours of the inflammatory phase, neutrophils and monocytes are the predominant cells at the site of injury. Subsequently, their number decreases and the number of macrophages increases.

In this second phase the cellular response predominates and it is the stage in which a permeable barrier is created (reepithelization), an adequate blood supply is established (revascularization) and a reinforcement of the damaged tissue takes place (fibroplasia).

Epithelialization is defined as the formation of epithelium over an area devoid of it. It involves the migration of epithelial cells from the edges of the wound to the centre. This process begins hours after tissue damage. The keratinocytes at the wound edges undergo structural changes, break their cell and basement membrane bonds, and are free to migrate over the wound surface, thanks to the formation of intracellular actin microfilaments. In partial-thickness wounds, adnexal structures that persist in the bed contribute to re-epithelialization.

The migration and proliferation of endothelial cells to form new vessels in the wound bed depends on fibronectin, heparin and growth factors released by platelets and macrophages. The family of Fibroblast Growth Factors (FGF) and Endothelial Vascular Growth Factor (VEGF) are powerful stimuli that promote neovascularization. Thrombospondins are endogenous angiogenesis inhibitors that limit the process.

Fibroblast is the cell responsible for the production of collagen, elastin, fibronectin, glycosaminoglycans and proteases. The number of fibroblast increases in the wound when inflammation decreases.

Fibroplasia begins 3 to 5 days after the wound appears, and may last 2-4 weeks. Migration and proliferation of fibroblasts occurs with stimulation of fibronectin, PDGF, FGF, Transforming Growth Factor (TGF), among others.

Collagen synthesis and deposit is essential. It is secreted into the extracellular space in the form of procollagen, which aggregates forming tropocollagen and then collagen filaments and fibers. This process occurs in a matrix gel formed by glycosaminoglycans, hyaluronic acid, chondroitin sulfate, dermatansulfate and heparinsulfate, all produced by fibroblasts. The amount of collagen in the wound is limited by collagenases and other factors that can destroy it.

Approximately 80% of the collagen in normal skin is type I collagen, the rest is type III. Conversely, type III collagen is the essential component of early granulation tissue and abundant in embryonic tissue.

Collagen remodelling during this phase depends on the balance between its synthesis and destruction, to which collagenases and other matrix metalloproteinases contribute. To regulate this process, inhibitors of tissue metalloproteases limit the action of these proteolytic enzymes.

This phase begins approximately 3 weeks after wound production, when the amount of collagen in the wound bed remains stable.

Cytokines are essential mediating proteins in the healing process. These proteins are released by different cells and may be involved in autocrine, paracrine or endocrine signaling. Among the most important cytokines in this phase are Epidermal Growth Factor (EGF), FGF, PDGF, Transforming Growth Factor beta (TGFb), Vascular Endothelial Growth Factor (VEGF).

Despite proper diagnosis and management, even in specialized chronic wound clinics, up to 20% of ulcers do not progress adequately (Velasco, 2011).

The biochemical environment that promotes the chronicity of these lesions is defined by a prolongation of the inflammatory phase due to increased activity of pro-inflammatory cytokines and metalloproteases, with the consequent destruction and deficit of growth factors and fibrin. Hypoxia and tissue necrosis, as well as repeated infections, promote excess proteolytic enzymes, metalloproteases, which destroy the extracellular matrix and prevent healing (Sánchez et al, 2012). The amount of metalloprotease 9 (MMP9) correlates with the duration and chronification of a wound, unlike fibronectin, since its presence stimulates healing. In order to successfully handle these patients, this vicious circle must be broken. In this context, inflammation control, the addition of growth factors and the modulation of the metalloproteases action in the wound may be interesting therapeutic strategies.

If you want to know more about metalloproteases: MMPs made easy

Mustoe TA, Gurjala A. The role of the epidermis and the mechanism of action of occlusive dressings in scarring. Wound Repair Regen. Sep 2011;19 Suppl 1:s16-21. 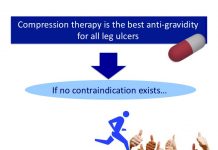