The idea to write this post came after reading the scientific program of the 13th Wound Specialist Day in Zürich. I find this year’s theme very interesting “When an ulcer is healed: prevention of recurrence”. One of the talks is dedicated to systemic treatment, a topic for which I am developing a growing interest.

If we think about the treatment of a venous ulcer, the alternatives that probably come to mind are compression therapy, dressings, skin grafting and surgery or endovenous procedures. And why do we forget about pharmacological treatment, perhaps because its benefit is not clear?

In the post “Ulcers and post-thrombotic syndrome: a therapeutic challenge” I referred to the interest of pharmacological treatment to protect the endothelium. We cannot forget that a venous ulcer is a consequence of capillary and subcutaneous cellular tissue damage produced by venous hypertension and, therefore, any action that decreases the damage at that level is interesting. Regardless of the underlying cause of venous hypertension, an anti-inflammatory strategy must be established to reduce the damage that is occurring in the endothelium due to the release of free radicals, pro-inflammatory cytokines and an imbalance between metalloproteinases and their inhibitors. The interaction between activated leukocytes and the damaged endothelium promotes thrombosis and the migration of inflammatory cells into the extracellular matrix, with consequent hypoxia and tissue destruction.1

It would be ideal to be able to help stop this destructive cascade with a pill, wouldn’t it? Let’s see what has been studied about this.

Drugs with antithrombotic and anti-inflammatory properties for the endothelium include pentoxifylline, flavonoids, acetylsalicylic acid and sulodexide. Pentoxifylline is the drug whose utility, in association with compression therapy, has the most evidence at present, with favourable results in the Cochrane review published in 2012. It is an agent with haemorrheological properties, i.e. it improves blood perfusion by making the red blood cell membrane more flexible and encouraging its passage through the vessels, as well as reducing platelet aggregation and fibrinogen levels.1

In this post I will explain in more detail sulodexide, a systemic drug with anticoagulant, antithrombotic and anti-inflammatory properties on the endothelium, which is increasingly present in our clinical practice. It is a mixture of 2 glycosaminoglycans, heparan sulfate (80%) and dermatan sulfate (20%). Unlike heparin, it can also be administered orally and has a lower risk of bleeding. The main novelty in its mechanism of action is its potential protective effect on the endothelium, since it appears to inhibit proteolytic degradation of the glycocalyx (protective layer of endothelial cells that is damaged by shear forces and inflammation secondary to venous hypertension).2 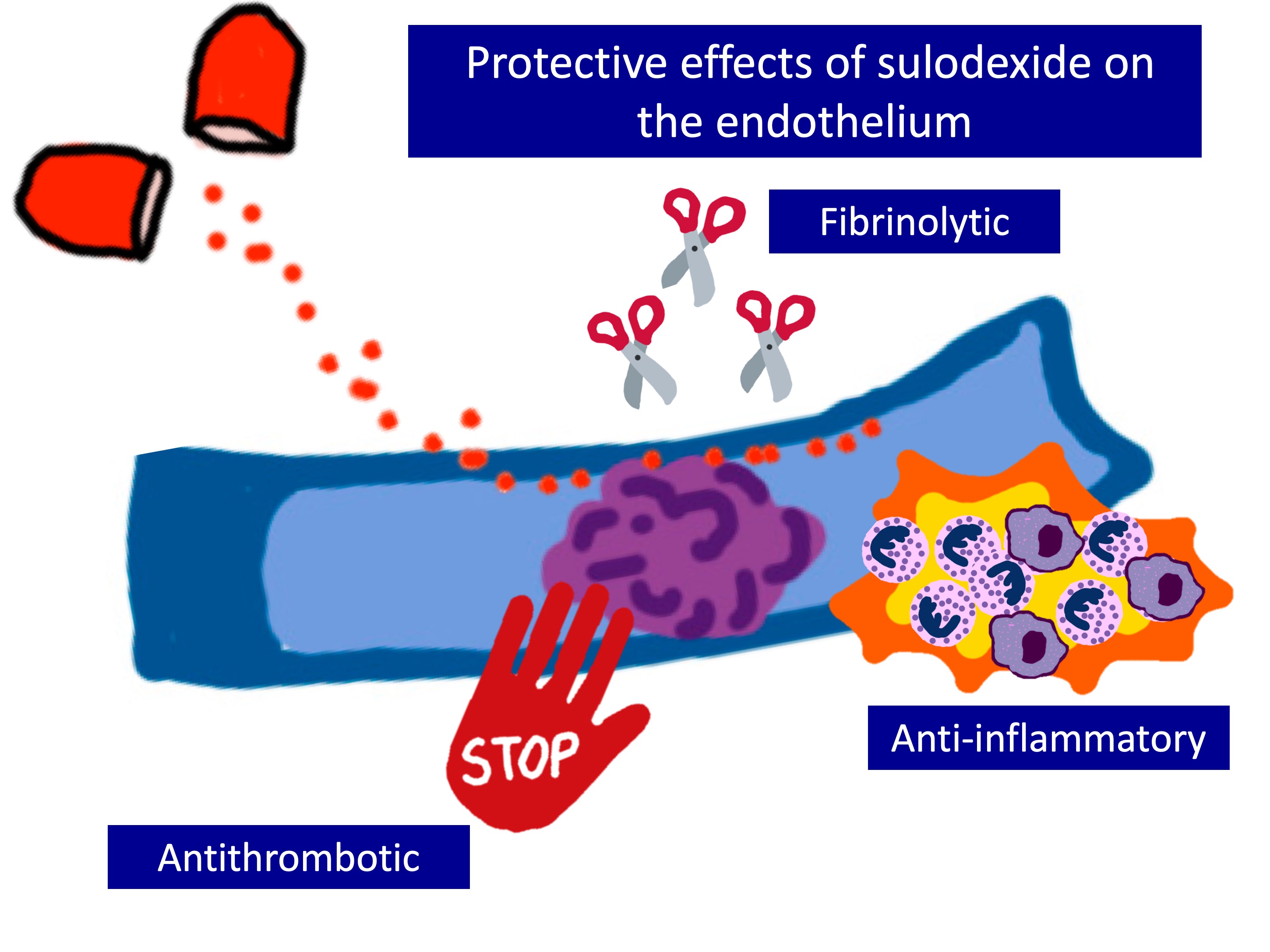 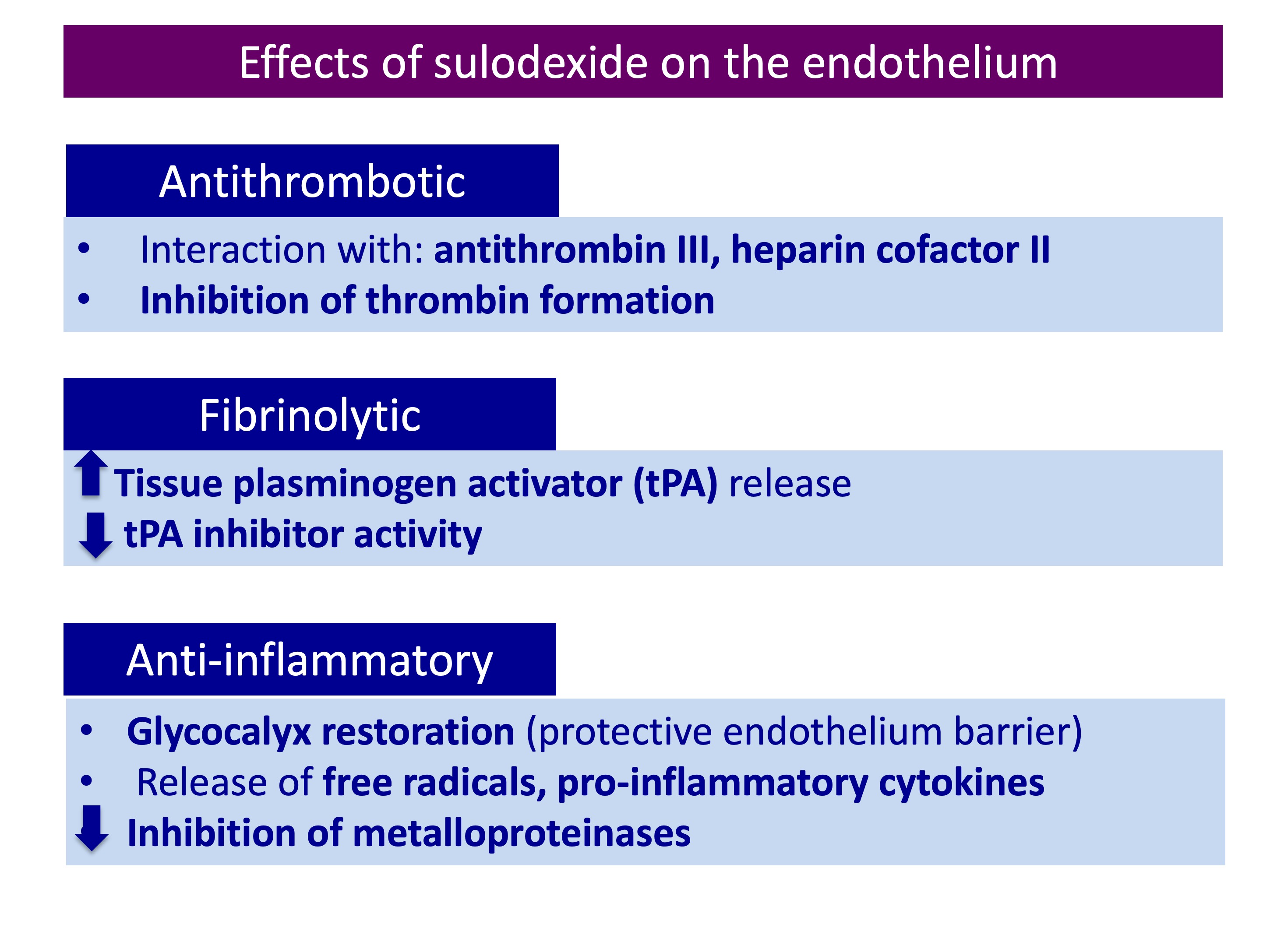 In addition to its benefit in healing venous ulcers, it has been shown to be useful in preventing the recurrence of venous thromboembolic disease and, because of its protective action on the endothelium, it appears to be interesting from the early stages of chronic venous disease.2

We will focus on its interest in the treatment of venous ulcer, in association with compression therapy and conventional local care. The randomized double-blind clinical trial with the largest sample size is the multicenter study SUAVIS (Sulodexide Arterial Venous Italian Study)3 , which includes 235 patients, divided into a placebo group (conventional treatment) and the treatment group (sulodexide + conventional treatment), with a duration of 3 months. Sulodexide was administered intramuscularly, once a day, for the first 20 days (injection of 600 LRU, Lipoprotein Lipase Realising Units, which are the units in which the dose of Sulodexide is measured). Later, until completing the 3 months of treatment, it was continued with oral administration (500 LRU) 2 times a day. A higher percentage of healed ulcers and a faster reduction of the wound area, statistically significant, were found at month 2 and 3 in the sulodexide treated group. However, a limitation of the study is the high variability between the conventional treatment performed on each patient (no standardization of type of local treatment and medical compression).

This study was analysed together with three other clinical trials, with a total of 463 patients included, in a Cochrane review in 20164. In addition to the heterogeneous sample size of the studies (range 20-235 patients), the dose and route of administration used (oral or intramuscular), as well as the duration of treatment, is variable between the studies (1-3 months). On the other hand, only one study was double-blind3 and conventional treatment was not standardized in 3 of the trials.

No major bleeding events were evident in the studies performed and no significant differences in the adverse events rate were detected between the sulodexide treated group and the control group.

Although a higher percentage of healed wounds, a greater reduction in wound size and an acceleration of healing were found in the sulodexide treated group, the low quality of evidence due to the small number of studies and the limitations of the included trials prevents from drawing conclusions from the actual usefulness of this drug. In addition, studies are needed to measure the impact of sulodexide on recurrence, quality of life and healthcare cost.

What is the real impact of this endothelium-protective strategy for our patients with venous ulcers? What dose and duration of treatment would be most beneficial in promoting healing and preventing relapses? I am sure that new studies will soon answer these questions.