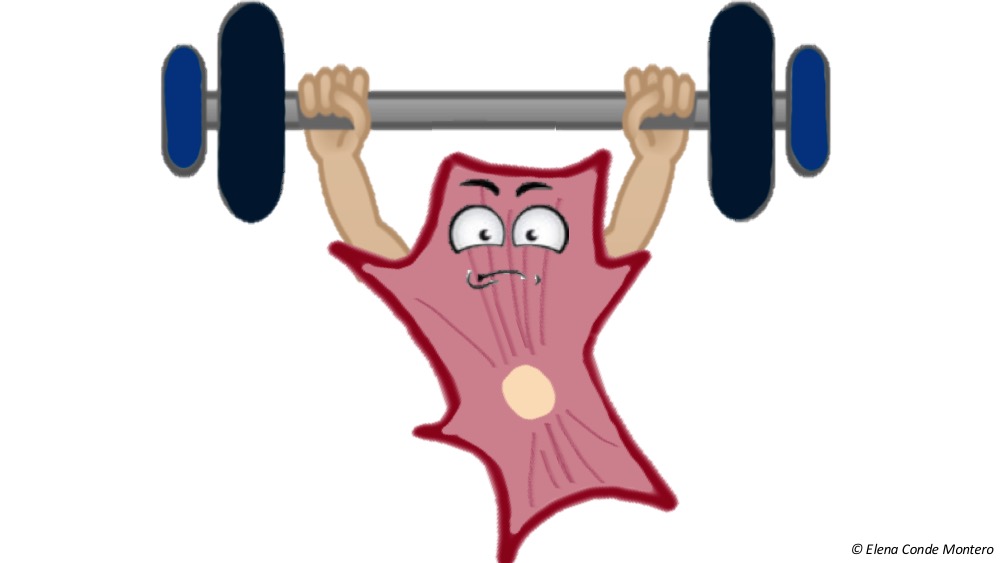 And why did I just remember the myofibroblast? Because a lot has been said about it in the Journées Cicatrisations 2019 (National Congress of the French Society of Wounds and Healing) in Paris. Once again this year, it has stood out for the high quality of the programme and the excellence of the speakers.

As it is typical in this scientific meeting, it has been discussed about both innovation and tradition. In this line, punch grafting, a technique that was described more than 150 years ago, has been again the subject of different sessions. It seems to be widely accepted that this procedure stands out, apart from its acceleration of epithelialisation, its simplicity, its analgesic power (very interesting in the Martorell ulcer) and its possibility of being combined with other techniques, such as negative pressure therapy. We cannot forget that the epithelialisation of a wound is produced by the linear proliferation of keratinocytes. One of the main obstacles is the senescence of these cells in long-standing wounds. That’s why we graft these stagnant wounds, voilà! I was delighted to see experiences similar to those we have in our practice 😀. 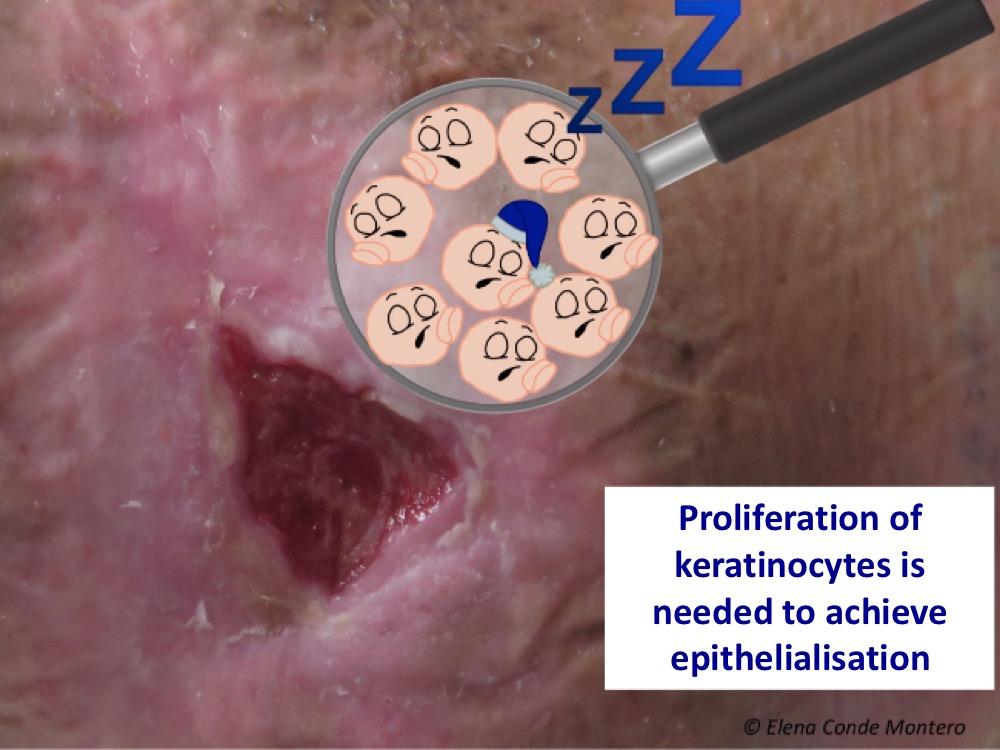 Let’s go back to myofibroblast. To understand the behaviour of this cell, its name gives us many clues (myo=muscle, fibro=fibre). This is a cell that promotes the contraction and production of collagen fibres in the wound.

This contractile power is due to the fact that it is a type of activated fibroblast that expresses in its cytoskeleton α-actin, a protein typical of smooth muscle, fundamental in the contraction process of muscle cells.

Myofibroblast is one of the main stars in wound healing, since its deficit will obviously slow down wound closure. In elderly people, or people with comorbidities that prolong the inflammatory phase of healing, proliferation and activity of myofibroblasts may decrease, as they depend on cytokines and growth factors released by cells such as macrophages M2, whose number is decreased in chronic wounds.1,2

A short reminder about macrophages:

A macrophage is a type of white cell (monocyte) that has specialised in the ingestion and destruction of bacteria and cell debris (phagocytosis) in tissues. Depending on the signals they receive from the environment, they can be differentiated into type 1 macrophages (M1) and type 2 macrophages (M2). The activity of the former is essential for the organism protection against pathogens (as occurs in acute wounds) but, if maintained over time, the pro-inflammatory cytokines they release stimulate a proteolytic environment that prevents healing. M2 cells release anti-inflammatory molecules to promote tissue repair. 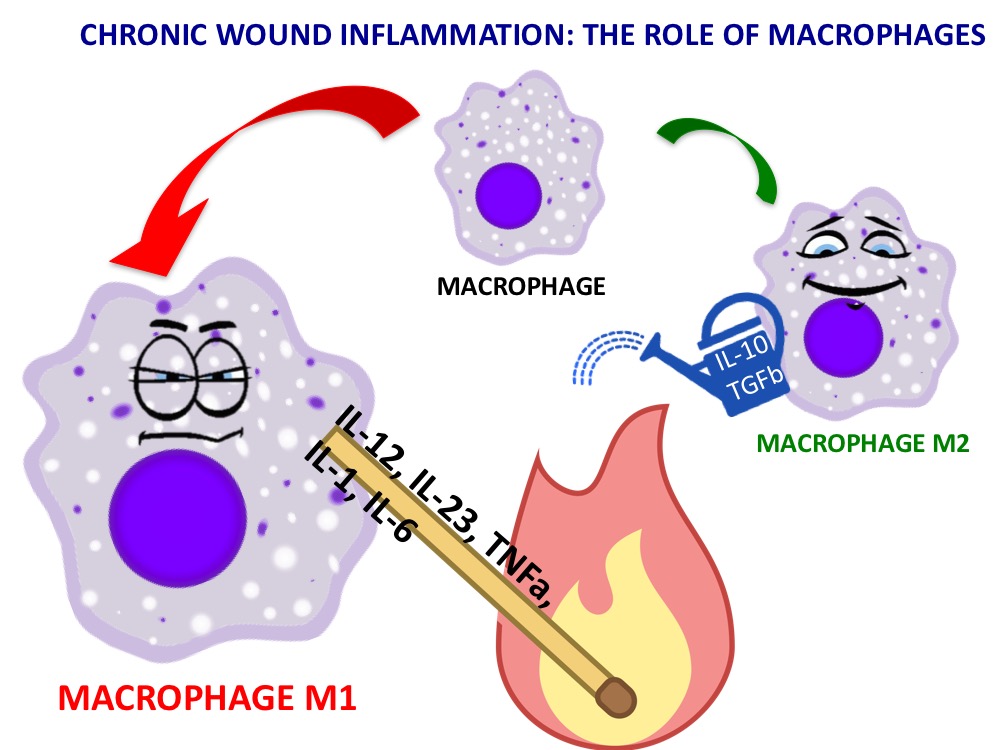 There’s no doubt that wounds need myofibroblasts. But watch out, not too many, not too long! Let’s see why I say this.

Below I have simplified what happens at the cellular level in an acute wound, which we academically divide into overlapping phases (hemostasis, inflammation, proliferation and remodeling). See post:”Brief overview of wound healing”. Complete epithelialization represents both the end of the wound and the birth of what is known as a scar. The healing process includes everything that happens from the appearance of the wound to the complete maturation of the scar.

As with the rest of the cells involved in the formation of granulation and epithelial tissue, as days go by and scar remodelling progresses, the programmed death (apoptosis) of myofibroblasts causes reduces their number in a few weeks.1 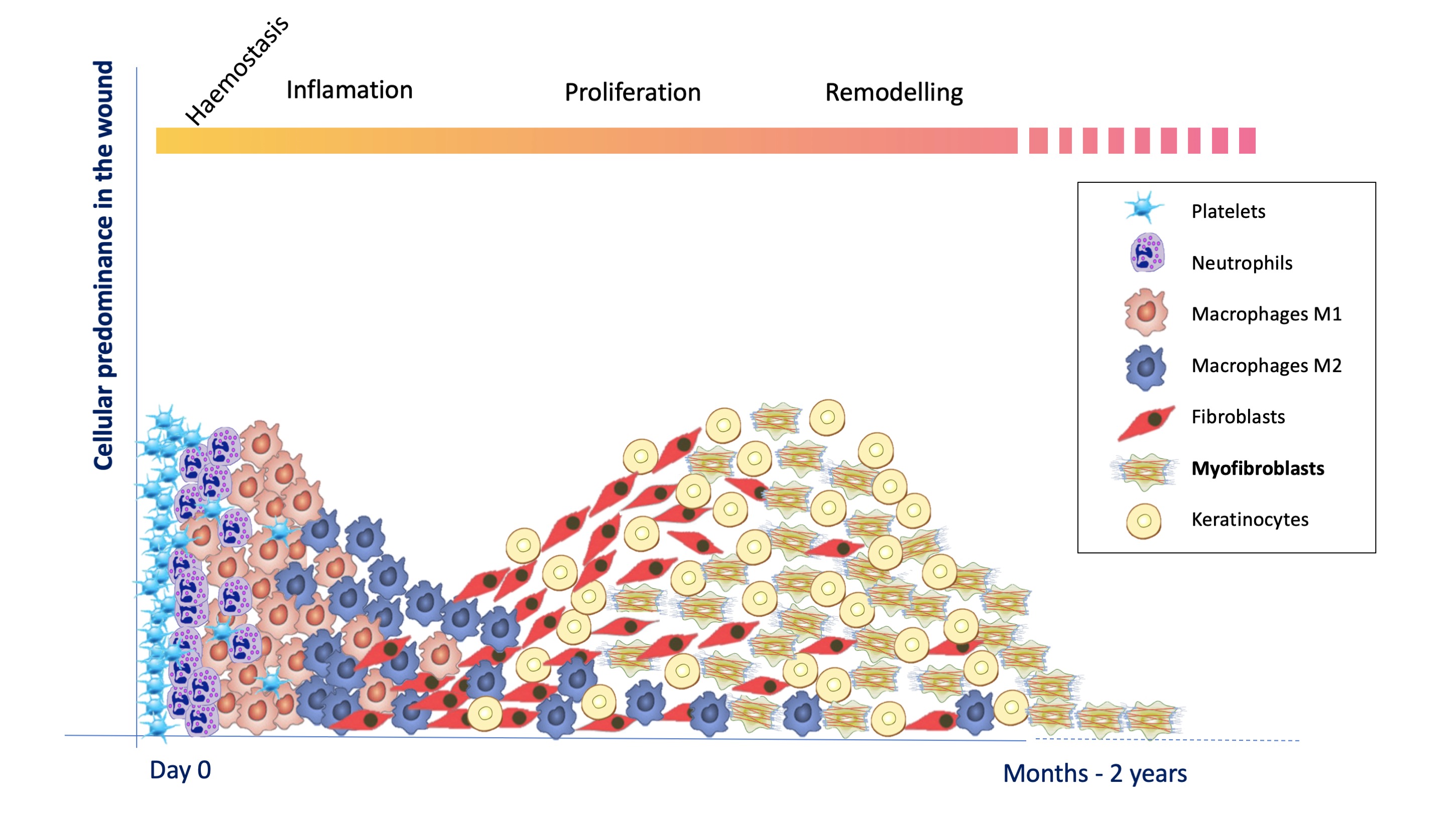 What can happen if the balance between cells, growth factors and extracellular matrix is altered and the activity of the myofibroblasts increases and is prolonged over time, months or years? An excessive contraction and fibrosis, that is to say, a pathological scar.

The remodelling phase of a scar is the least known, but it is essential for the extracellular matrix to reorganize, for type III collagen to become type I and for the tissue to gain the maximum elasticity possible. It has been shown that the density of myofibroblasts maintained over time produces excessive scarring, with its cosmetic and functional repercussion.1 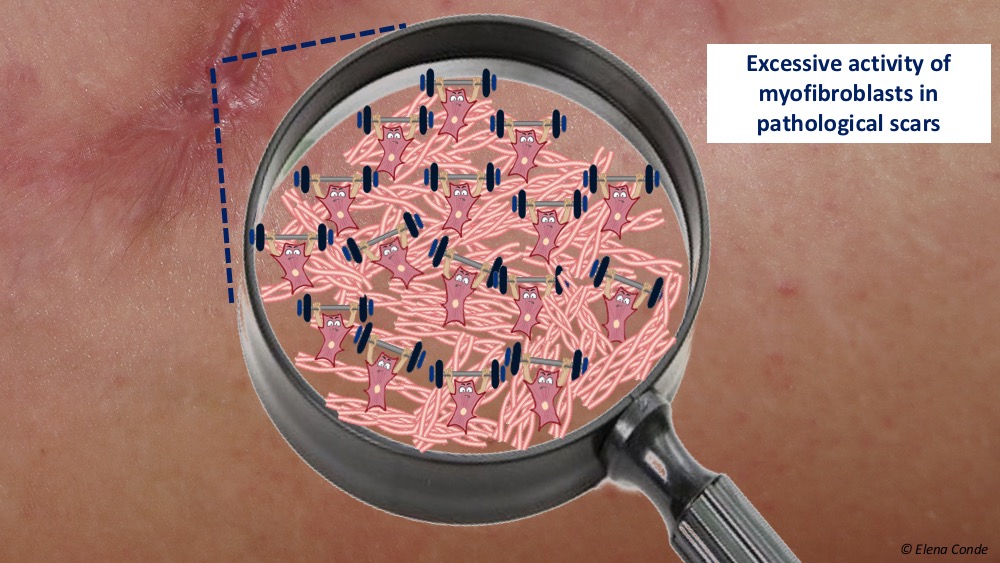 Theory is fine, but how can we help in order to activate them in stagnant chronic wounds and stop them when we want to prevent or treat hypertrophic scars?

How to activate myofibroblasts in chronic wounds?

All strategies that reduce inflammation (control of comorbidities, appropriate etiological treatment, local treatment of the wound bed) will favour their proliferation and activation.  The mechanical stretching force produced by negative pressure therapy on the wound bed and edges is a good way to stimulate myofibroblasts.1

How to reduce its activity to prevent or treat hypertrophic and keloid scars?

There is growing interest in research into pro-myofibroblast factors, including the Transforming Growth Factor β1 (TGF β1), whose inhibition would prevent fibrosis.1 The problem is that this and other proteins are also involved in the proliferation, among others, of keratinocytes and endothelial cells, thus affecting general wound healing. Specific targets must therefore be sought.

Currently, silicone dressings and corticosteroid infiltrations are the measures most recommended in the guidelines and most used in clinical practice. Multiple mechanisms of action of silicone have been proposed, mainly silicone sheets, among them that moisture and occlusion it provides would simulate the protective characteristics of healthy skin and reduce the activity of myofibroblasts and collagen formation. In addition, consequent decreased tension from the sides of the scar can also slow down the activity of myofibroblasts, as these cells respond to mechanical forces. With respect to the corticosteroids, they have been shown to inhibit TGF-β1 expression, thus inhibiting the proliferation of myofibroblasts and favouring their apoptosis.

Other treatments, including cryotherapy, 5-fluorouracil (5FU) or bleomycin injections, laser, can also be very useful.3

However, rather than focusing on single treatments, the general recommendation is to use combined strategies, focusing on the importance of regenerative rehabilitation. What do I mean by this? That we have to optimize scar functionality, with physical treatments that favour its elasticity and reduce adhesions.

In another post we have already talked about the benefits of massage (“Compression therapy and scar massage in post-traumatic and post-surgical wounds“) but I would like to recall the interest of this and other physical therapies to promote the appropriate scar remodelling.

Any mechanical forces exerted on the skin, although minimal, affect the cells, which detect them and adapt to the change by modifying their activity. The healing process is strongly influenced by the effects of mechanotransduction (i.e., transformation of the biomechanical force on the cell membrane into intracellular molecules that act as second messengers). The effect of this mechanical force may be clinically observed in the characteristics of the scar. While it has been shown that stretching forces on a scar maintained over time increase TGF-β1 levels, activity of myofibroblasts and collagen formation, other forces, such as those produced during massage, can produce the opposite effect. However, optimal intensity, duration and frequency of this type of treatment are unclear.

Another interesting strategy is pressure therapy on scars, which has been studied predominantly in burns (wounds with well-known high risk of hypertrophy). The most widespread recommendation is to use devices or garments that exert a local pressure maintained between 20-30 mmHg, which is sufficient to overcome capillary pressure without the possible adverse effects of higher pressures. By decreasing local capillary flow, activity of myofibroblasts and collagen production is reduced.3

Returning to the interest of combined treatments, Peter Moortgat‘s team (whom I had the pleasure of hearing at the Journées Cicatrisations) has just published a randomised study to analyse the benefit of pressure therapy added to silicone occlusion.4 The clinical trial includes 60 patients with hypertrophic scars after burns of variable evolution time and compares the benefit of using a cohesive silicone bandage and silicone sheet after 6 months of treatment. No differences were found in colouring and subjective assessment by the patient, but in the compression bandage group greater scar elasticity and a better subjective score by the practitioner were found. The authors associate improvement with elevated and continued pressure on the scar area. Among the limitations of the study are the different characteristics between the groups, the different scar locations, and the short duration of the study (since alterations in scar remodelling may appear more than a year later).

More studies would be interested to answer multiple questions that arise: When should we start pressure therapy and how long should it be maintained? Which device is the most suitable for our patient?